The word “bug” is a commonly-used blanket term for any type of arthropod, whether it be insects, non-insect hexapods, arachnids, isopods, myriapods, worms, and even gastropods like slugs and snails.

Most bugs you will have a problem with in your garden are predominantly herbivores. Your garden is a vast field of tasty food for these plant-eating critters, and if you don’t mind your crops closely, you can end up with an infestation and destroyed plants.

Thankfully, these tiny herbivores are pretty low on the food chain and other creatures see them as a tasty meal. These predators are known as “beneficial” insects (or if you want to be more inclusive, “arthropods”), and are a natural way to control pests in your garden.

Beneficial insects (and other arthropods) are considered a “biological control solution”, which is a term used to describe the method of controlling pests using other living organisms. They may provide a long-term sustainable pest control solution for you, without a single drop of pesticide.

Why Use Good Bugs?

What’s the point of adding more bugs? There are many good reasons to opt for a natural pest control solution over a chemical pesticide.

The most obvious benefit to using biological pest control is that you do not have to resort to using chemical pesticides. Using nature is completely non-toxic and allows you to grow your plants organically. Using chemical pesticides can have a negative environmental domino effect. You may be killing many different animals, including extremely beneficial pollinators such as bees and butterflies. American bee-keepers report losses from 29% – 45% a year due to industrial-scale pesticide use

Pesticides are even putting you, your family, and your community in harm’s way. According to the Pesticides Action Network of North America, pesticides could increase the risk of death for all adults, particularly farmers, agricultural workers, their families, communities, livestock, and pets. Pesticides can cause all sorts of health problems including causing cancer, harming reproductive health, and harming children. The American Academy of Pediatrics points to pesticide residues on food as the most direct route of childhood exposure, and can potentially lead to children being more likely to develop neurological disorders such as Autism Spectrum Disorder (ASD) and Attention Deficit Hyperactivity Disorder (ADHD). Children are absorbing a higher load of pesticides during a critical developmental stage of their life, and are thus less able to protect themselves from harmful chemicals, according to the Pesticide Action Network.

So, in short, your spider-bros and bug-buddies don’t just have your back, they’ve got your community’s back, too. The next time you take a bite out of your home-grown fruits and vegetables, you can take that bite worry-free of any harmful chemicals. Make sure to give a toast to your tiny heroes outside for your health.

Good bugs are important for the long-term maintenance of your garden as you are allowing a natural ecosystem to flourish. As explained in the last point, pesticides can absolutely destroy any natural ecosystem, from a tiny bug to a human being. When there are no natural predators around to control populations, that equals free game for the pests; thus you will continually repeat the process of applying pesticides. Pesticides are great at “killing” and are also very expensive, especially to maintain.

Yes, chemical pesticides really are expensive. However, using natural predators to prey on pests is really cheap. You can buy them when you need them for very low costs, but you can also attract them to your garden naturally. Specific types of plants and herbs will attract these beneficial bugs for free!

Need ladybugs for an aphid problem? No problem, you’ve got some dill in your garden. To be the best place in town for ladybugs, you could even consider planting some common yarrow, fern-leaf yellow, and basket of gold, too. Also, don’t pull those dandelions. Ladybugs love them! If you buy them or if you attract them, they’ll be there to stay.

By using predators in your garden, not only are you saving money on pest control, you can also experiment with a variety of fresh herbs in your culinary endeavours!

While you experiment cooking with all the new fresh herbs in your garden, you’ll be pleased to know that nature is on your side. Even before the phrase “survival of the fittest” was described in Darwinian evolutionary theory, natural selection has shaped our world since life began. Evolution, however, is very accelerated in the very short life spans of garden pests compared to the long lifespans of humans.

Only recently have resistances to pesticides becoming a problem in humanity’s approximate 10,000 years of utilizing agriculture. Since 1945, about when humans started using pesticides on an industrial scale, between 500 and 1,000 insect and weed species have developed resistance according to the Pesticide Action Network.

Thankfully, predators have been around for millions of years, and there isn’t much a pest can do about becoming dinner.

There are many benefits to introducing predatory insects into your garden. However, before you do that, there are important things to consider, especially if you are buying them.

1. Regulations & permits – Some species of predatory insect require you to have a permit to import them, especially if they are not a native species or they can potentially become a problem to your local environment.

Always consider your situation before investing in biological control methods, as they should not be viewed as immediate solutions. It may take anywhere from a few days to a few weeks to see any result. Patience is a virtue, and make sure you are doing your part to provide the most suitable environment for your beneficial insects, arachnids, and other creatures to co-exist with your garden.

Facts: Ladybugs can consume more than 5,000 aphids during their lifetime.

Facts: Mantises can turn their heads 180 degrees to view their surroundings!

Facts: Most spiders complete their life cycle in one year.

Facts: Ground beetles are typically only active at night.

Attracted by: Dills, plants with plenty of pollen and nectar, source of water

Facts: damsel bug populations can thrive if you provide them alternative places to hide.

Facts: the larvae does the actual job of getting rid of soft-bodied pests.

Facts: both immature stages and adults prey on a variety of small insects. Will bite humans, but irritation is minimal.

Facts: soldier beetles do not damage plants and are harmless to people.

Facts: Tachinids are parasitic. They lay eggs onto the host or onto nearby foliage, some even deposit live larvae into the host’s body.

Facts: Hover fly larvae feed on pests, while the adult flies feed on pollen. Hover flies are a product of evolutionary mimicry. Adults mimic the appearance of a wasp or a bee to ward off potential predators. Unlike wasps and bees, hover flies have no stinger, but the end of their abdomen has a stinger-like appendage for “looks”.

Preys: mealybugs (not all species)

Attracted by: humid environments like greenhouses and high tunnels

Facts: predatory mites feed on the pollen, and not the plant itself, when prey is unavailable.

How To Use LockDown Pads

Don’t worry we don’t bite! If you have any questions or concerns please feel free to reach out to us. 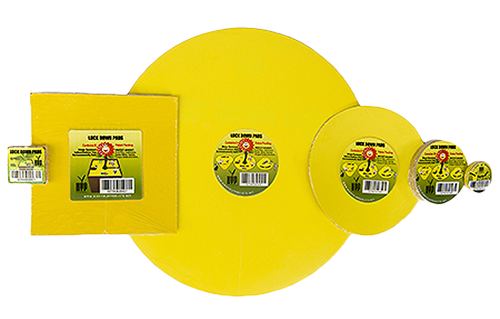